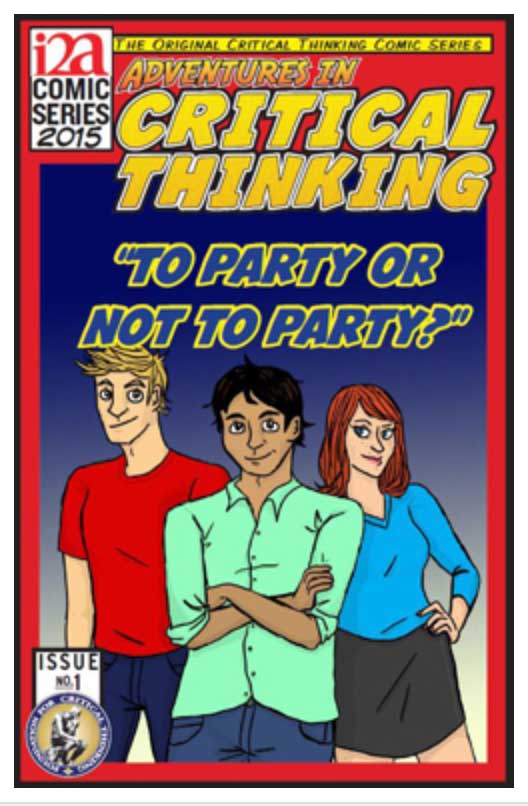 “[The comics] helped me think about how I thought during similar situations. This is what, in turn, aided my learning and helped improve my thinking.”

About the Critical Thinking Comic Books

The purpose of the critical thinking comic book series is to depict a beginning critical thinker, Paul Elder, as he makes his way through everyday undergraduate life on Belknap Campus. Paul faces opportunities and situations in his everyday life that can benefit from new ways of thinking and applying the concepts of critical thinking.

The comics were written and illustrated by UofL students who were trained in using the Paul-Elder critical thinking framework by Department of Philosophy faculty member Dr. Brian Barnes. Dr. Barnes conceived and completed the comics in fulfillment of an i2a SUN Grant.

The front matter of each issue introduces the parts of the Paul-Elder framework–the Elements (printed in blue), Standards (printed in red), and Intellectual Traits (printed in green). This color-coding system is used in the subsequent story cells and some of the thought balloons in order to prompt readers to identify one or more of the corresponding Paul-Elder critical thinking components occurring in that cell.

For access to all six comics in the series, contact i2a specialist for critical thinking Dr. Edna Ross.

How to Use the Comics

Instructors and staff members at UofL may wish to use the comic books in a variety of multi-layered methods, including:

Page 2 of each comic book issue provides approaches and strategies for using comic books with students to foster the development of critical thinking.

Dr. Barnes has created YouTube videos to help introduce instructors and staff members to the comic books and explain how to use them: